Born in Spain, she started playing the harp at the age of six and two years later attended the Professional Conservatoire of Music of Valencia where she studied with Ana Martínez. She completed her studies in 2016 with the Professional Prize of Music in Harp and Chamber Music, and the Scholarship Prize of the RSEAPV. She was guest harpist of the Valencian Government’s Youth Orchestra in 2013 and was appointed principal harp at 14. Noelia has been involved in Madrid Symphony Orchestra’s Proyecto Talentos since being selected in 2015 and is a winner of its 2017 Soloists’ Competition. She has also been a reserve in the Gustav Mahler Jugendorchester (GMJO) for the 2017 season, and is currently a reserve in the European Union Youth Orchestra (EUYO).

At 15, she was offered a place at London’s Trinity Laban Conservatoire of Music and Dance and is currently in her third year of studies with Gabriella Dall’Olio. Noelia has been generously supported by the Gladys Bratton Scholarship Fund during the 2015/16 year, and is currently a Rosamund Mott Scholar, Trinity College London Scholar and AIE Spain Scholar. 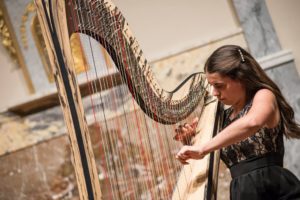