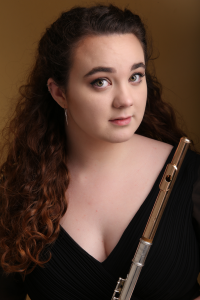 Megan is part of a flute and harp duet with her great friend and fellow student, Noelia Cotuna. They regularly give lunchtime recitals in the Chapel, Royal Navel College, Greenwich. They play a continually expanding repertoire, for contemporary to classical, making their duet extremely enjoyable to both watch and listen to. Most recently the pair debuted Megan’s first composition Grace in the Old Royal Naval College Chapel, as well as winning the annual Camac Chamber Competition in north London. To find out more about their duet, click here.

Megan is also a studying conductor, and has recently taken part in two “Women Conductors” workshops run by the Royal Philharmonic Society, where she has had the honour of working with Alice Farnham. In March 2019 she debuted her film orchestra, Cinematic Syncopations Orchestra, at Blackheath Halls, performing popular film music such as Harry Potter, Lord of the Rings and Pirates of the Caribbean, raising over £500 for the Cystinosis Foundation UK. Future concert for Cinematic Syncopations Orchestra are in the pipeline, and more information about the new orchestra can be found here.

As an orchestral performer, Megan has been the principal flautist for the Trioca Project, an orchestra consisting of young musicians ages 18-25, from England, Germany and Serbia, since 2015. With the Triorca Project, Megan has performed in Germany, Serbia, Norwich and Saffron Walden under the conducting baton of the inspirational Nicholas Daniels, most recently performing Peter and the Wolf at Saffron Hall.

As a soloist, Megan has performed and competed in many events over her studies, including winning the Festival Musician of the Year Trophy and Senior Recital and Harold Taylor awards at St Andrews Festival in Gorleston. Megan was invited to host her own concert at St Georges Theatre, Great Yarmouth, in July 2015 as a result of these awards. She made her soloists debut with North Norfolk orchestral Society in 2015, playing Chaminade’s Flute Concertino. She has achieved second place in Norfolk Young Musicians Competition in 2015 and 2018. She was the youngest semi-finalist in the Trinity Laban Soloists Competition 2016, playing the Reineke Flute Concerto entirely from memory. More recently, Megan was one of the youngest finalists for the Music Club of London Musician of the Year 2017, where she was commended on her performance at such a young age, as well as receiving a special mention in the annual British Flute Society competition 2018, for her performance of Orange Dawn by Ian Clarke. In her home town, Megan has performed for and organized a vast amount of charity concerts, and performed St Georges Theatre in March 2018.

Prior to Trinity Megan was a prominent member of Norfolk County Youth Orchestra from 2011-2015, becoming principle flautist in her final year. Megan has performed in Belgium and Germany alongside conductor Andrew Morley, and has performed with renowned pianist Stephen Hough. In early 2017 Megan was invited to return to NCYO for their first alumni concert, where she performed Mahler’s 1stSymphony. From 2014-15 Megan was also a member of Britten Sinfonia Academy, where she worked with composer John Woolrich and performed for his 60thBirthday Concert at the Barbican. She has also been a member of Norfolk Centre for Young Musicians, and taken part in the St Patrick’s Day Parade in Dublin with Essex Marching Corps.

Whilst studying at Trinity Laban, Megan has taken part in many ensembles including Wind Sinfonia, Wind Orchestra, Sinfonia Wind and most notable the Trinity Laban Symphony Orchestra. Megan has performed numerously with Blackheath Halls Orchestra, and was invited to play with Lambeth Symphony Orchestra for their concert of Mahler’s 1stSymphony. Most recently, Megan performed with the Trinity Laban Symphony Orchestra at Cadogan Hall, London, accompanying soloist (and duet partner/dear friend) Noelia Cotuna in her performance of Renié’s Harp Concerto. Megan has also taken part in numerous masterclasses with some amazing flautists including, Ian Clarke, Robert Winn, Andy Findon, Emily Beynon, Dave Heath, Wissam Boustany, Fiona Kelly and many more.

During her postgraduate studies, Megan is currently sponsored by the Masonic Charitable Foundation, the Trinity Laban Innovation Award, the Joan Greenfield Scholarship, the Michael Hurst Award and the Trinity College London Scholarship.

Megan offers affordable flute, piccolo and music theory lessons. She teaches during academic term time from the ages of 7 upwards. For more information on her teaching, please visit: https://www.musicteachers.co.uk/teacher/786b138f4360cb8a8ee9

Enjoying living in London, Megan loves to spend her free time watching and analyzing films, dreaming about corgis, and is a proud Hufflepuff. 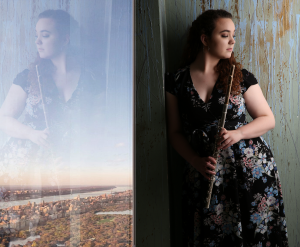